Life expectancy is getting shorter in New Brunswick

As of 2013, life expectancy at birth for New Brunswickers has been declining, unlike the life expectancy of the average Canadian. On average, a Canadian born between 2017 and 2019 was expected to live about 16 months longer (to the age of 82) than a person born in New Brunswick (80 years and 8 months).

The impact of avoidable mortality

Over the past 70 years (mostly 1950s - 1990s), improvements in preventive health services have helped reduce the onset of some conditions that are associated with avoidable deaths. These improvements are for example:

These improvements contributed to adding several years to life expectancy at birth.

Avoidable deaths seem to be on the decline across Canada (based on the rate per population), contributing to gains in expected years of life at birth for Canadians overall. Since 2013, however, more and more New Brunswickers are dying before age 75 due to potentially avoidable causes, and this is impacting life expectancy in this province.

Avoidable deaths are classified as being due to either treatable or preventable causes, both of which have been on the rise in New Brunswick over the past seven years, contributing to the losses in expected years of life in the province.

(Potentially avoidable) Deaths due to preventable causes: Premature deaths that might have been avoided through efforts such as vaccinations, lifestyle changes (such as quitting smoking) or injury prevention.

(Potentially avoidable) Deaths due to treatable causes: Premature deaths that could potentially have been avoided through effective screening (such as colonoscopy) and treatment of disease (such as the management of chronic conditions or radiation therapy for cancer treatment).

Over the past decades, five out of the top 10 causes of avoidable deaths in New Brunswick were almost completely preventable; two are classified as treatable; the remaining three are 50/50 influenced by effective treatment and prevention (i.e. preventing their onset, as well as effective management after they occur are equally important to avoid premature death).

Analysis of avoidable deaths in New Brunswick from 2007 to 2011 and from 2012 to 2016 demonstrated an increase of more than 20% for deaths related to the following causes:

While avoidable deaths have been increasing at the provincial level, looking at the regional trends helps understand which causes have been contributing to the increased mortality and where.

COPD is the highest contributor to the increase in avoidable deaths (29% increase), a disease which is considered mostly preventable. Rates of avoidable deaths from COPD increased by more than 20% in all zones except Zone 1 (Moncton and South-East Area). The main increases were in Zone 4 (Madawaska and North-West Area), Zone 5 (Restigouche Area) and Zone 6 (Bathurst and Acadian Peninsula Area). The highest increases in deaths from colorectal cancer (a treatable disease) occurred in Zone 5 and Zone 6.

Two conditions that claimed more lives on average between 2012 and 2016 were almost completely or partially preventable (COPD and diabetes). In healthcare, prevention and health promotion services are provided mainly by the primary health and public health services. Together with community initiatives focused on health promotion, their effectiveness are instrumental in reducing the onset of these chronic conditions, thus the premature deaths they can cause.

In 2018, both diseases were more prevalent in N.B. compared to the Canadian average.

Primary health services are important in preventing the onset of these chronic conditions. Over the past 10 years, the NBHC has highlighted the need to improve the quality of primary health (including timely access to primary health services, and health promotion efforts) to help citizens adopt and maintain healthy lifestyles, and address barriers to preventive services (screening, tests, medications, etc.).

On a positive note, despite the opposite pattern in earlier years, there are now fewer cigarette smokers in N.B. (14%) compared to the Canadian average (16%). This finding does not have an immediate impact on cancer incidence and lung diseases, but if the reduction is sustained, it may lead to fewer chronic diseases in the future.

A warning about radon

Radon is a gas that is found in rocks and soil. Outdoors, radon gas is diluted and does not pose a health risk. However, it can accumulate when inside a home or building. Chronic exposure to radon has been shown to be a risk factor for lung cancer and is the primary cause of lung cancer in non-smokers.  When associated with smoking, radon increases the risk of lung cancer. Levels vary across the country and a cross-Canada survey of Radon Concentrations in Homes has shown that New Brunswick and Manitoba have by far the highest levels of radon concentrations in Canada (Health Canada, Cross-Canada Survey of Radon Concentrations in Homes, 2012).

The role of treatment

Timely and effective health services contribute to reducing mortality from treatable causes, which account for one third of the avoidable deaths.  Effective management of chronic conditions like diabetes, heart disease and stroke, as well as timely and effective treatment for breast and colorectal cancers improve the quality of life of citizens with chronic disease(s) and reduce their odds of dying because of the condition.

Unfortunately, when asked about their confidence on being able to manage their health condition, only 41% of New Brunswickers with chronic health conditions reported being very confident in controlling and managing their health condition (2017 edition of the Primary Health Survey). This percentage ranged from 31% in Zone 4 (Madawaska and North-West Area) to 43% in Zone 2 (Fundy Shore and Saint John Area) and Zone 3 (Fredericton and River Valley Area).

Timely access to cancer treatment like radiation therapy is one example of services that can reduce the fatality rate from cancers. Despite the gains N.B. had achieved in meeting wait time benchmarks for radiation therapy between 2010 and 2015, recent wait times have been getting longer.

Life expectancy, after a steady increase over time, is now on the decline in New Brunswick. An increase in avoidable mortality has contributed to this decline. Avoidable causes of death also merit close monitoring and better understanding at the local level.

Accessible and effective health services and public health programs can prevent the onset of many of the preventable causes of avoidable deaths, as well as improve the odds of survival for patients with conditions that can be properly managed and treated.

Addressing areas of improvement in health service quality (both for prevention and treatment) can contribute to saving lives of New Brunswickers and increase their life expectancy. 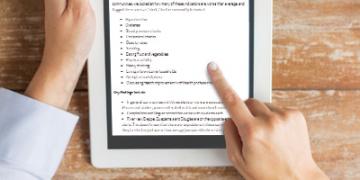